Without a doubt in my mind, Judo has its place within the UFC arena. That is not to say that this post is about the irrelevancy of Judo and its throws, but how to highlight the Judo aspect within the UFC. We can look at the history of the UFC and its brilliant practitioners of MMA that uses all aspects from throwing/take downs, stand up, and ground work. Judo has its place and we continually see fighters incorporate throws in their game. We have Ronda Rousey and her continuous use of the modified harai-goshi to her powerful juji-gatame.  Urijah Faber in UFC 175 performed a beautiful ouchi-gari to catch his opponent off-balance and onto his back.

The real question I intend to explore is about fostering and emphasizing the Judo aspect in the UFC. Think of this scenario, you’re sitting there watching your favourite fighter on the big screen. Seconds tick by as they trade blows. They strategically pace and stalk each other, before one fighter catches a mistake and clinches the other. The fighter hugs the opponent and loads them on their hip. Your palms get all sweaty and you’re about to vomit on your sweater already, mom’s spaghetti. You know it is coming, the reckoning, and the throw – the harai-goshi. And then Joe Rogan screams in his head set, “HUGE JUDO THROW.” Wait. What? Huge Judo throw? This is UFC 195, and we’re still using “judo throw” to describe. Every. Single. Judo. Throw. Yet, Mr. Rogan can correctly identify that one specific rubber guard transition into space cadet astronaut dog fist? (Not a slight against 10th Planet Jiu-Jitsu – just sayin)

Making Judo relevant in the UFC will mean making Judo visible. That means correctly identify and using accurate judo terminology. Like any sport, having well-qualified sport commentators on certain aspects of UFC/MMA could help educate fans.  Perhaps during matches with well known judoka (Hector Lombard, Karo, Ronda) someone like  Matt D’Aquino, Travis Stevens, or Jimmy Pedro could act as an additional play-by-play commentator. You can include training segments and coaches discuss throwing tactics. We see this in football, rugby, hockey, and other sports. Certain plays and common terms (like the fumble, interception and kick off) is a form of communicating from one fan to the other. Terminology is certainly an aspect that the UFC will have to focus on.  Does it have to be Japanese? In my opinion, it doesn’t necessarily have to be – sweeping hip throw, outside reap, inside hook are cross over terms from wrestling.

What do you think?  Are the Japanese terms for judo throws a barrier for those trying to learn about judo from an outside perspective? Will the use of judo increase in UFC? 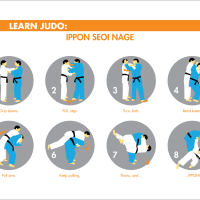