After much anticipation of this Olympian grappling match, it came to an unexpected ending.  Rousey and McMann spent the majority of the fight in the clinch near the fence, however, it was the aggressive striking of Ronda Rousey which gave her the win via TKO.

See the GIFs below as Ronda throws a total of 8 left knees to Sara’s liver with the last crumpling McMann.  McMann looked to be getting up however it wasn’t before Herb Dean steps in to call the match.

Ronda is able to back Sara into the fence and they trade knees to the stomach.

A grazing left knee is followed by a left knee by McMann’s.

Ronda has her favourite head and arm grip and is working to unbalance Sara when she throws a big knee, this disengages them for ronda to land a right elbow.

Sara is trying to get her underhooks, and Ronda takes a left whizzer grip (this video explains a whizzer) and whips McMann over towards her right followed by a big left knee to crumple McMann.  It looks as though McMann is getting up right away to continue, however, it’s too late as Herb Dean has stopped the fight.  Ronda by TKO at 1:04 of the first round.

A better angle in HD

What did you think of the referee stoppage?  Was it too early or just right? Post in the comments below! 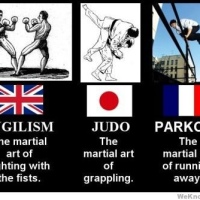